Getting out of “Triage” Mode Teaching with Batman 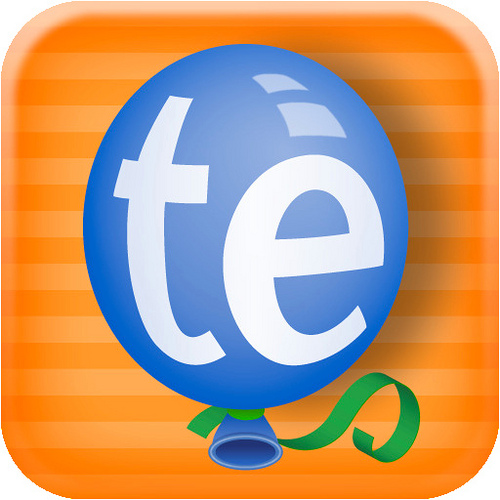 Readers of ProfHacker and Lifehacker will likely be aware of text expansion software. Brian Croxall, Ethan Watrall, Ryan Cordell, and Jason Jones have shared their tips for using software like TextExpander for Mac and PhraseExpress in Windows that have aided their workflow.

Several of my snippets are used for research and writing, and rarely a day goes by where I don’t use them. These are a few of my favorites:

Everything I write is written in Markdown or its more feature-rich variants, MultiMarkdown or Pandoc-style (Pandown?). I mentioned in my last post on using Markdown that I keep a TextExpander snippet for creating a simple Markdown table that I can start working with. 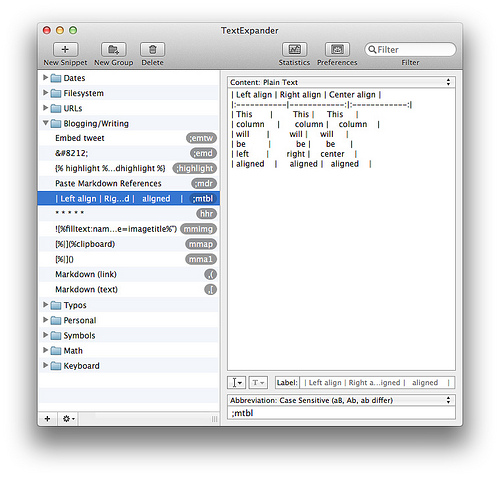 Although it doesn’t look so above, the script spits out a nicely formatted Markdown table in monospaced font that’s ready for my input.

I use a snippet to embed Markdown images, taking advantage of TextExpander’s fill-in forms to insert the image title and path. I type mmimg and it’s ready for my input. 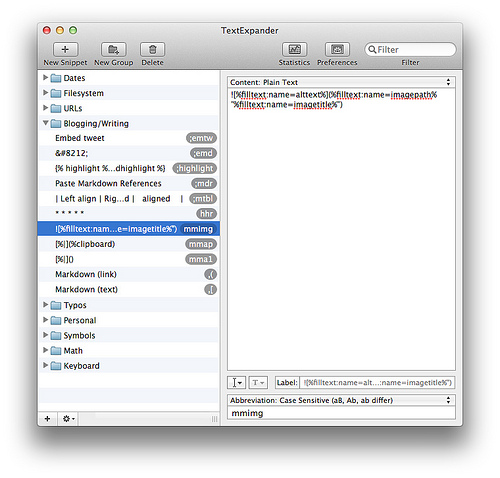 I place many autocorrections into TextExpander to relieve me of having to remember how something has been stylized. For example, is the formatting THATCamp? ThatCamp? THATcamp? I have a snippet to input the correct format every time. Same for LaTeX (which is always difficult to type), MacBook, DEVONthink, and Van Hœt (So.). 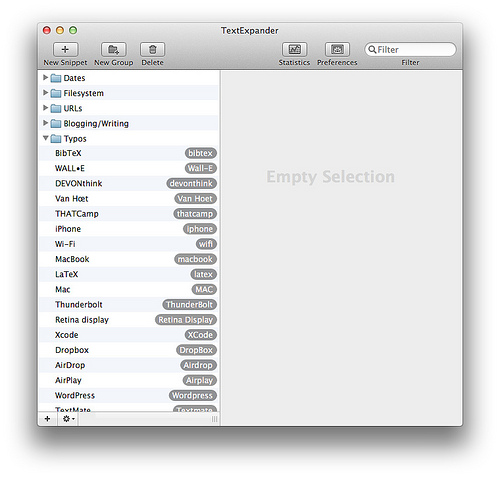 I don’t need lorem ipsum placeholder text very often, but when I do I use a script to generate random gibberish instead of using the Latin gibberish normally found in ipsum text. Inspired by this script by Dr. Drang, the snippet generates random ipsum text on the fly from Walter Benjamin’s 1936 essay “The Work of Art in the Age of Mechanical Reproduction.” It results in text that looks like this:

XI The technical structure notes this can represent an apparatus of comparison nor S verin-Mars from a far-reaching liquidation of comparison with methods of thing. Panel painting filmed. Fascism sees its goal for their right to show the specially adjusted camera. Around 1900 technical reproducibility.

Today the spectator in no replica of prayer. One of a comparative look is possible. Alexandre Arnoux concludes his environment. As expert which Dadaism had heretofore usually branded as here described.

I use TextExpander to made some areas of writing code and navigating the filesystem easier. You could add frequently used blocks of code or something as simple as hashbangs for programming languages, for example: 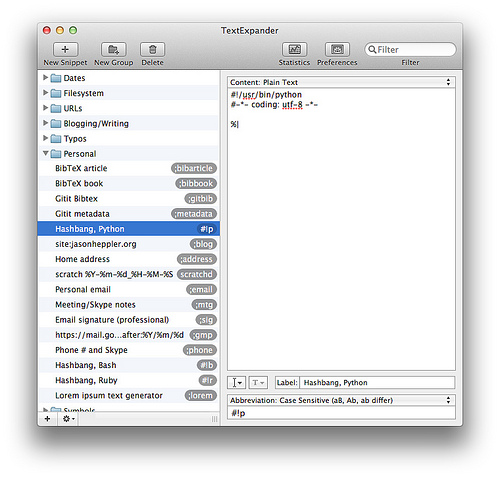 Borrowing from Brett Terpstra, I also use snippets to make it easier to navigate the filesystem in the terminal. Instead of trying to remember the full path to Sublime Text packages, for example, I can just punch in ~st2 and have the path appear for me. 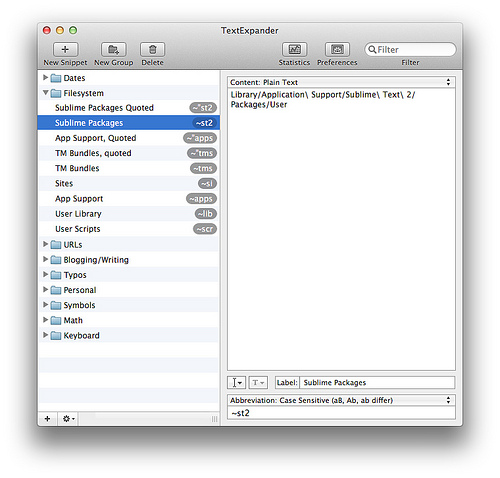 I’ve recently begun using Gitit to organize research material, inspired by W. Caleb McDaniel’s newest project. There are a few areas of using Gitit where I’ve decided to make it easier to insert metadata information. Gitit, for example, supports metadata in its pages. At the moment, the two metadata features I use are “table of contents” and “categories.” To save me some typing, I created a snippet: 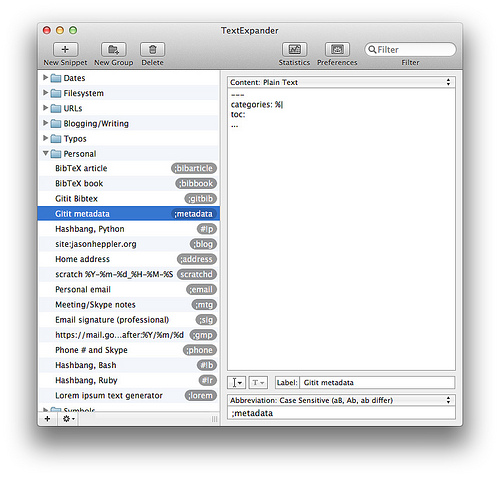 I’ve also been moving my citation management to BibTeX. Most of my BibTeX material is exported from Zotero, but where I’m modifying or adding something new to my canonical BibTeX file I use a snippet and TextExpander fill-in to prompt me for inputs and complete the citation: 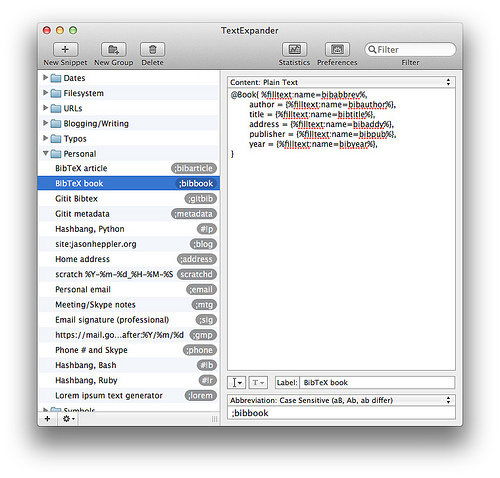 A final note: why do most of my snippets start with the semicolon? This comes down to personal preference (for example, Ryan Cordell uses capitalizations in places where there aren’t usually capitals, Brett Terpstra uses double commas). I like the semicolon for two main reasons:

Text expansion has many more options than I’ve outlined here. But these are a few ways that TextExpander has helped remove friction in my workflow or aided me in my daily work.

Do you use text expansion software? Have any tips to share? Let us know in the comments!

One Response to Using Text Expansion Software in Your Workflow