The Problem with Assumptions: Sciences, Humanities, and Future Careers? 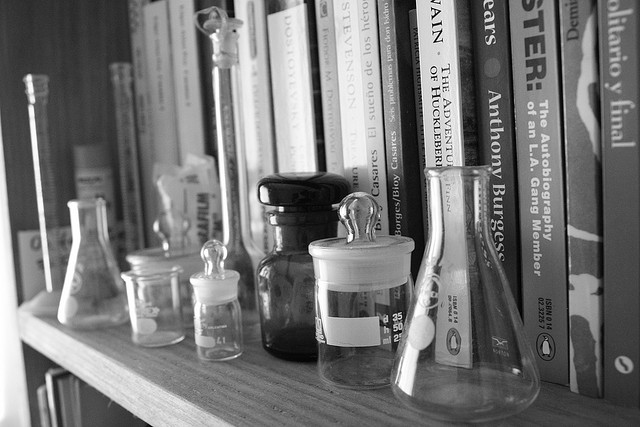 Erin Bedford (@erinellyse) is a PhD student in Nanotechnology Engineering at the University of Waterloo and the Pierre and Marie Curie University. Kelly Hanson (@krh121910) is a PhD Candidate in English at Indiana University-Bloomington.

This post began as a glimmer of hope, and perhaps a little delusion. When those of us in the humanities look at the narratives about academia flooding the internet-there are no jobs, adjunctification, offers pulled, funding cut, and so on-we sometimes get thinking that those in the sciences tend to have it better. More consistent funding. Easier publishing opportunities. Jobs at the end of the tunnel. These are obviously whims of fancy with no basis in reality. But they point us to a larger issue: in both the humanities and the sciences, the gaps that divide us often lead to fantastical understandings of what the other fields do, how they train, how they research, and what they value. And so, we, Kelly (in English) and Erin (in chemistry/chemical engineering), are here to open things up. We originally conceived of this post as a way for those of us in the humanities to learn from the more practical minded scientists. But, we learned as we corresponded and began writing, this post is more about changing our collective frames of mind about our different fields.

We began with some broad questions: Why do most students pursue advanced degrees in this field? What type of jobs does your department prepare you for?

But we soon realized realized that the sciences and the humanities were fundamentally different not in their methodologies, but in the ways our roles as graduate students were perceived, both inside and outside the academy. The difference lies in assumptions, assumptions we make about ourselves, assumptions professors make about us, assumptions the greater world and market make about our skills, value, and abilities. And while very real economic factors-like the number of jobs available-are certainly important factors in the very different experiences graduate students in the sciences and the humanities have, it seems that many of the differences lie in the realm of the socio-affective, the psychological, the emotional. How do we relate to advisors? How do we mentally prepare for the job market? What doors do we believe our degrees will open for us? Why are we here? How are we taught to feel (or not feel) about our work and our future?

If you’re getting a PhD in the humanities (especially in Kelly’s home field of English), advisors, professors, and colleagues will assume, safely or not, that you’re going to pursue a career in academia. In-class assignments will often include “professionalization” assignments, like writing an abstract, presenting your research paper as if we were at a conference, or writing a seminar paper that will be a launching point for a future article or publication. They will not include professional advice or projects clearly linked to non-academic careers. And while “professionalization” is not a reason to get a doctorate in the humanities, the lack of connection to non-academic positions makes imagining alternative futures or personal narratives really, really hard.

Perceptions and cultural representations of humanities graduate students outside of academia compound this problem. Most people have a hard time imagining an advanced humanities degree qualifying you for anything but university teaching. (We can probably just short-hand this as the snarky “what are you going to with that degree?” question). Between public perception that devalues humanities research and professional skills, and professional advice based on the assumption of going into academia, it can become very difficult for humanities majors to even imagine a job outside of academia. After all, if there aren’t stories or models, it can be really difficult to imagine a future for yourself that is anything other than the same narratives you hear from advisors.

This is where we found the sciences to the most useful because in sciences and engineering, advisors rarely assume that you’ll go into academia (although this varies by field). They recognize that there aren’t enough tenure track positions for everyone; therefore, it’s in their best interest to encourage those who are interested to follow other paths. While they are most familiar with the academic path, they have friends and colleagues who have taken others; alternative models exist that result in equal success to the academic model. There is a long history of collaboration between academic and industrial research, so this path is in no way foreign to experts in the field. On the other hand, careers outside of these familiar alternative models often leave science/engineering students in the same position as those in the humanities. While a graduate degree provides a versatile set of skills, it can be difficult to know where you might fit in when you’re not familiar with these paths.

The science/engineering departments or career services departments have the same view. There is support for students who want to pursue an academic career, but in recognizing that there aren’t enough academic positions for all of their graduates, there is also support to help students with the non-academic job search. Courses are offered to teach “communication,” “networking,” “leadership,” and “management”—these seem to be the skills that departments feel are needed to help graduate students find and succeed in non-academic positions. In most humanities PhD programs, such “career services” are not widely spoken about or centralized in individual departments. Even in the discourses coming from academic organizations like the Modern Language Association, questions of employment and “professionalization” often assume an academic career path.

Opening up discussion about alternative career paths may be happening more quickly in the sciences and engineering, but in both areas, we see how assumptions limit where we see ourselves and thus where we end up. There are many ways to combat these assumptions, but the first step is changing the narratives available. Based on what we learned from each other, projects such as Versatile PhD seem to be on the right track. The site provides descriptions and discussions of non-academic career paths for all types of grad students. By exposing grads and future grads to stories of success in non-academic career paths, the concept of what it means to have a graduate degree can change.

How else do you think assumptions about future career paths can be changed?