Taking the Guilt Out of Grad School

This post walks a fine line, somewhere between spiritual advice and bad decision-making.  It just depends on your point of view.  I want to share this philosophy to my fellow grad students, especially the newer ones.  The topic: Grad School guilt.  Disclaimer: This is all based on my own experiences, and although I am sure that some grad students have lives filled with sunshine, puppies, rainbows and not a care in the world, I have the feeling that this advice is for the majority of real world grad students out there.

I will start with a story.  When I first came to grad school, we sat down in our intro cohort class, which meet once a week for 3 hours, and began with introductions.  Introduce yourself, your area of concentration, and who is your favorite anthropologist (seeing as how I am an anthro grad student).  I had no idea who my favorite anthropologist was (still don’t to this day, but I can say there are a few I don’t care for).  Being the clever lad that I am, I pulled something out of my…lets say hat…which sufficed and pleased my instructor.  The thing was, everyone had some excellent answer of some great anthropologist who has written a million ethnographies, and they have read them all, and love their work, and so on.  I soon became aware that I was the least knowledgeable in class, and began feverishly trying to get a handle on becoming a better anthropologist and student.  Not only that, but there seemed to be a one up’s manship that occurred in class, and although mild, some competition between peers.  I started to feel guilty that so-and-so stayed up until 3 in the morning reading, while I was selfishly asleep!  I spent hours in the coffee shops.  I tried to gauge how I stacked up against my peers in terms of hours spent studying.  I later realized that you can’t possibly read everything assigned in grad school…and personally, I don’t think you are meant to.  I think its some secret “quality over quantity” lesson they are trying to instill, I just wish they would have told me that sooner.

As time went on, and I became a second year, I quickly associated doing anything for myself as selfish or wrong.  “I can’t go to the movies…isn’t there a 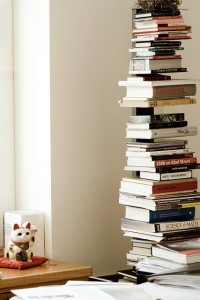 book I should be reading?”  Or, “Oh well, I will date when I’m in my forties!”  Or the famous, “No way I can take a trip this weekend, I have an important something or other on Tuesday!”  What grad school does to us is that it makes us feel guilty about taking time for ourselves.  We are expected, by some unseen force, to always be working, always be reading, and always be writing.  What are we supposed to be writing?  Who cares…write dammit!  We look at some of our professors and try to model our work ethic off of theirs.  Or we try to out-compete our fellow classmates.  By my third year, I found out it wasn’t worth it, and picked up some hobbies.  I took more trips, I dated, I traveled (and not for work).  And I still got things done.  The ultimate lesson, and this may seem backwards, was that by dividing up my time more between my work and myself, I learned how to manage it correctly.  I’m not saying I became a slacker (which most of you are probably thinking).  No, I merely became an average human being…you know, 9 to 5, some weekends off, holidays.  Not only is there this work until death mentality in America, but in the higher education systems as well.  I simply broke the cycle.

And the number one thing I learned from all of this…not to feel guilty about it.  I would come in on Mondays, feeling refreshed and energized, while the bags under the eyes of my classmates shone in the florescent classroom lights, and told me the story of their weekend.  I learned how to just have fun again, and not worry or feel guilty about what was awaiting me on my desk, or in my email inbox.  I learned how to support my peers, not compete with them. My final nugget of wisdom: there will always be work waiting.  There will always be deadlines.  It is inevitable, for that is the life we have chosen.  But if you don’t learn how to take time for yourself now, you may never.  And then this will become the norm, and that isn’t okay.  A healthy mind begins with a healthy soul…( I think I read that in a yoga studio or something…sorry for the cheesiness).

14 Responses to Taking the Guilt Out of Grad School