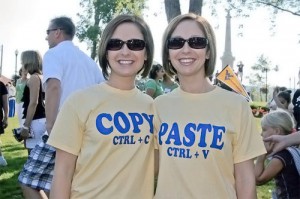 We’ve reached that point in the semester that can become oppressive for TAs and grad students teaching their own courses.  Those essay assignments that seemed like such a good idea back in September are seeming distinctly less so as teetering piles of ungraded papers on your desk.  Just as your own semester workload is increasing and deadlines loom for conference abstracts, job applications, travel grants, and summer internships, here comes the dreaded stack of unmarked papers, some of which you know will consume more of your time than they did of their authors.

It was along about this time last semester that we inaugurated “Plagiarism Week” at my other blog, Stillwater Historians.  We thought it could be a bit like Shark Week only dorkier.  But mostly it represented an opportunity to think through one of the stickier problems of contemporary higher education.  In a series of forum-style posts (available here, here, and here) we focused on root causes of plagiarism among students and struggled with whether or not our typical approaches to detecting and penalizing offenders did anything to address those motivations.

What we found generally was that ideas about plagiarism vary dramatically between individuals, disciplines, and especially generations.  And we’ve done a rather poor job of articulating for students what exactly it is and why it should be taken seriously and avoided.  Instead we generalize into even more vague and ambiguous terms like “academic honesty”—around which we wrap policies that are seldom read and almost as infrequently enforced.  It makes it onto every syllabus in what I like to call the “yadda” section based on how those sections are treated in the typical course orientation.

But what is perhaps more troublesome is that our culture isn’t doing much to help.  Every news story we read is an ill-fitting paragraph or two of update grafted onto the exact same story, word for word, that we read yesterday—which leads me to believe that journalism professors likely characterize plagiarism very differently than history professors do.  Identical language can be found repurposed all over the internet.  On one occasion when I confronted a student with their plagiarized essay, and a printout of where I had found the offending copy, he said, “well yea, I copied it, but not from there.”  The cluelessness I had anticipated, the casualness I had not.  At the end of the day I’m not sure he saw much of a problem with his approach to the paper, nor did he seem much bothered by the notion of failing the course.  And to be honest, if he had actually done enough work to encounter duplicate versions of the same text, as someone not entirely acclimated to the culture of academia, why would it necessarily occur to him that he could not duplicate it himself.  Students model what they see.  In most instances we like that.

There’s a lot of talk in higher education these days about relating to so-called “digital natives.” I have to continually remind myself that the oldest of my undergraduates were in diapers when I was in college.  Unfortunately though, we generally relate to our students through  our own college experience.  While the internet was in formative stages of its development when I was in college, it was never a meaningful part of my experience as a student.  As such, plagiarism was actually a rather daunting undertaking.  It could be a refuge for the dishonest back then, but certainly not for the lazy.  I remember one parents’ weekend when I took my parents on a tour of the library and showed them how I could use a computer terminal to find a book anywhere in the library.  Today if that same terminal couldn’t locate any book in the world, or indeed a full-text keyword-searchable version of anything ever printed, we’d call somebody!  So thinking about the behavior and outlook of my students based on my own undergraduate experience doesn’t make a whole lot of sense with the availability of material being so dramatically different.

There is also a lot of hand-wringing about the absence of basic skills among new generations of students. While we all seem prepared to lament what we perceive to be underdevelopment in our students, no one seems particularly inclined to take it upon themselves to fill in these critical gaps.  There are students who, for whatever variety of reasons, arrive in college with no earthly clue how to construct an essay.  When our assignments assume skill sets and understanding that our students don’t have, we are paving the way toward short cuts.  At the college level everyone seems to think that cultivation of basic literacy and study skills should be someone else’s responsibility.  And with this perhaps the expectation that someone else will brief students on plagiarism as well.  Many students, I’ve become convinced, resort to plagiarism because they just don’t even know where to start when it comes to writing an essay.  In fact they don’t even know how to frame a set of questions or really to whom they should direct them.  So they wait. Eventually, a hastily cobbled together casserole of repurposed text is the best solution they can muster to the crisis.  There are absolutely cases where it’s nothing more than a manifestation of laziness.  But I truly believe that there are other cases where it is the result of a desperate lack of preparation.  And this has caused me to rethink some of my hard line responses to offenders that I advocated earlier in my career—because who am I to say which motivation yielded the outcome.

A few years back I worked with a team of historians on a collaborative project that was accepted to a conference.  We applied for a travel grant, which was administered by our campus-wide graduate student organization.  However, because we could only apply as individuals we each summarized the project in our own words and then each submitted the budget we had worked up together—because we were going to travel together, the budgets were naturally identical, which we each made plain in our explanations. The committee of grant readers, who were all grad students, threw out our applications because they believed them to be plagiarized.  When we appealed that decision, the grants officer, now incidentally a professor of communications, did not overrule them.  Whether it was disciplinary, departmental, or personal, clearly there were some inconsistencies in how plagiarism was being defined among groups of people whose responsibilities included, in part, mentoring undergraduates.

So what does this mean for us as instructors and TAs?  Whether you are the instructor or the TA, you should make sure that the teaching team develops and abides by a common definition of and policy for plagiarism.  You cannot create a situation where one student fails and another gets to rewrite because you know those two students will turn out to be roommates!  On the first day of class you should make sure to not “yadda” the academic honesty section on the syllabus.  Ideally your syllabus should include both the university-wide policy as well as your own disciplinary, departmental and/or personal biases about plagiarism and how you expect your students to steer around it.  Be wary to do this without creating a mortal, crippling fear of plagiarism where students feel like one misplaced citation or missing quotation mark will land them in lifelong academic jail.  If the course does not include clear definitions, policies, and practices perhaps you gently advise the instructor to develop them so as to mitigate complications down the line.  Decide how (and if) you will search for plagiarized material in student work.  What tools will you use? (Perhaps one of the more tech-oriented gradhackers might contribute something that weighs the merits of different tools-there are several)  Think about honing assignments that are plagiarism-proof.  This won’t always stop it entirely but it will make it more easily detectable.  Spend time in labs or discussion sections doing orientation to incredibly basic organizational and mechanical aspects of writing.  Give the students actual examples showing how you expect things to be presented and cited. This may encourage students who really need guidance to ask the questions they’re often unwilling to ask.  And incorporate into your courses, especially introductory courses, examples of how your discipline can use the capabilities of the internet in responsible ways.  Many faculty assume that digital natives know more about the internet than they do because they grew up with it.  They don’t. Hopefully a frank set of conversations between faculty members in departments and faculty and grad students and TAs will lead to approaches to plagiarism that are better oriented to underlying motivations that cause it and better, more proactive, responses to it that promote learning and not just detection and punishment.

How does your department approach plagiarism?  Are policies and expectations (both of you and of the students) clearly communicated to you as an instructor and/or TA? Let us know in the comments below.

Tagged with: grading • plagiarism • TAing • teaching • writing
If you enjoyed this article, please consider sharing it!

3 Responses to Steep Grade Ahead: Grad Students and Plagiarism