From The Editors: GradHacker/ProfHacker Crossover Week My Productivity Rules

Productivity and My Menu Bar Heroes 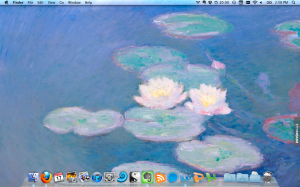 Guest author Caitlin Holton is a graduate student in the Department of History at the University of Guelph. Her research examines masculinity and homosociality in medieval Scotland through analysis of documentary and literary sources. You can follow her on twitter at @caitlin_holton.

Have you ever organized an unconference session? Being good Gradhacker readers, I’m sure many of you have. My first was at the Digital Humanities Summer Institute this year at the University of Victoria. I proposed a session I called “Free and Cheap Apps to Improve Your Life.” For some reason, that made people laugh. For some other reason, people decided to come! The goal of the session was to think about daily tasks that could be accomplished more easily through the use of computer and mobile device applications. At the session, we talked about some common problems, brainstormed solutions and, of course, shared our favorite apps. While there are some great, not-so-free apps and programs out there (Scrivener and DevonThink Pro come immediately to mind) there are a lot of fantastic programs that cost next to nothing. My favorites are the ones that integrate seamlessly into my life and offer solutions, sometimes to problems I didn’t even know I had.

When I turn on my computer, these programs are already running; they sit in my menu bar just waiting to be called up:

QuickCal ($2.99 for OS X) – This one tends not to amaze the way some do, but I have no idea why. I love it. QuickCal works with iCal, Google Calendar, and BusyCal and converts natural language into calendar entries. One of my favorite parts is the “Smart Alert” feature that creates alarms automatically based on how far out the event is. Coffee tomorrow with my advisor? An alarm goes off five minutes out. Assignment due next month, get an alert a week out. The best part is that it’s entirely customizable based on your preferences.

Pomodoro apps ($1.99 − $4.99 for OS X) – There’s been a lot of talk about these apps and the Pomodoro Technique they’re based on. The version I use is, unfortunately, no longer available, however, they all work more or less the same. Each Pomodoro is composed of a work period and a break period (originally twenty minutes of work followed by a five minute break). Start the timer and work straight through until it goes off. If someone interrupts you, you have thirty seconds to return to work or the timer resets. To my mind, the strength of this system is two-fold. First, it’s great for time management. It forces me to put pen to paper (or rather fingers to keyboard) for a set length of time, but it also restricts me to certain period. When I first sit down at my desk, I’ll set a “social media” Pomodoro. Twenty minutes to catch-up at the start of the day, but from then on, I only check Twitter and Facebook during my five-minute break periods. The second benefit is that it keeps me honest. You know those days where you grab a coffee with a friend, have a meeting (or three), and respond to a bunch of emails, then tell yourself you “worked on your dissertation all day”? Pomodoro won’t let you get away with that. If you’re especially brave (or honest) many of the apps offer a “Post to Twitter” option to really show how much you’ve gotten done.

f.lux (Free, available for OS X, Windows, Linux, and iOS) – I don’t think I’ve ever shown this app to someone without receiving a “wow!” and a “where do I get that?” f.lux adjusts the color of your display based on the time of day. At night, it changes the harsh blue tone of your computer screen to a warmer color that’s much easier on the eyes. Seriously, this one will change your life, except that once you install it, you’ll never think of it again. At least until you use someone else’s computer without it.

Divy (Free Trial, $14, OS X and Windows) – I debated whether to include this one for a couple reasons. First, at $14 it’s a bit outside my idea of cheap (though not too far). Second, unlike the others, it’s not one I use every day. Divy is an app that resizes your screen window for you so that you can get that perfect 70:30 division between windows (or any other ratio) without dragging it around. Because it’s easier seen than explained, I’ll just direct you to their video.

Evernote (Basic Version – Free; Premium – $45 a year) – Those of you that know me will be amazed I got this far without mentioning Evernote. I am, after all, the girl with not one, but two Evernote t-shirts. No word of a lie. Evernote is at the heart of my workflow. I use it for everything but hard-core research, including notes at conferences, contacts and business cards, course syllabi, bibliographies, and program requirements. I also use it for collaboration. With the Premium account I’m able not only to share notes (which you can do on the basic account) but also edit and create notes in shared notebooks. This makes it a breeze to organize conferences, proposals, and other events. While there are other programs or tools that serve the same purposes, I can’t think of any that are as flexible or that accomplish it all in one program.

What I most appreciate about these apps is that I really don’t have to change anything I’m already doing. These programs don’t require me to create whole new processes or techniques, but with very small adjustments to my life, make things faster, easier, and neater. The one exception to that is Evernote. There are lots of posts floating around the internet on how academics use Evernote, but generally, though it does involve changing your emailing, archiving, and note taking processes, I do think it’s worth it.

If you’re interested in taking a look at the apps mentioned in the DHSI unconference session, check out the Google Doc, but I’ll finish off with two key ideas I took away from the session. First, while it kills me to write this, you don’t need an app for everything. That coin-flipping app on my phone? Not necessary. I’ve used it (frequently even) but I really don’t need it in my life. If the process or application is taking over, step away. The second point came from Natalie M. Houston, who highlighted the difference between capturing and processing. I used to feel guilty about making a list with pen and paper but then realized that I sometimes just work better that way, especially when it comes to thinking through the various stages of a large project. A blank piece of paper, pens and highlighters sometimes work best for capturing the information I need, but if it stays in paper form I’ll lose it and it’ll never get done. Once my thoughts are down, I can add them to Evernote or wherever they belong. This might seem like a waste—doing things twice—but this process means that I get the best of both worlds, and in the long run it usually saves time. My advice: use the best tool for the stage that you’re at, whether it’s capturing or processing.

These are a few of the programs that help me out. Is there an app you love? Let me and the GradHacker community know. I’m always on the lookout for new ones!