On Being an Able Grad Student: 5 Strategies for Increasing Accessibility Disability in Graduate School 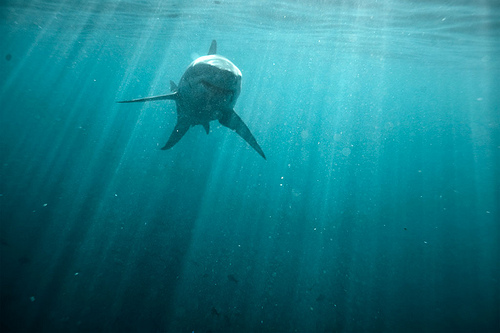 Or, Maybe Somebody Ought to Do Something About Those Effing Sharks…

Today is the fourth day of a week of posts written by and for graduate students navigating grad school with disabilities. This article was submitted anonymously by a US-based post-doctoral researcher in STEM.  For more information, see the original post on PhD(isabled), a blog for PhD students with disability or chronic illness to share their experiences and expose structural oversights and problems in higher education.

I was diagnosed with a medical condition about half-way through grad school. I won’t unpack that story here but suffice it to say the condition, which I will refer to henceforth as “SFMC” (as in Stupid F’n Medical Condition) is chronic, intermittent, and usually progressive. It lasts a lifetime and can result in fairly severe disability. Due to the circumstances of my diagnosis, disclosure during grad school wasn’t really an issue of choice. I’m happy to say that people in my academic circle were very supportive and actively helpful, including my PI and other people I looked up to as mentors.

In spite of the potential long term ramifications of said SFMC, nobody told me that I should consider leaving science. I’m glad for that. It would have crushed me. But then, I really didn’t get much in the way of advice beyond the standard “advice for grad students.” The topic of long-term illness was one that seemed to generally befuddle people.[I] The main piece of situation-specific advice I was given was that moving forward in my career I should be very careful about disclosing my SFMC. This advice echoed from every corner I tilted an ear to. I heard it from mentors, from family in academia, and from people I didn’t know but reached out to because it seemed like they had solid perspectives on academic careers. It was an amazing show of unanimity – Seriously, you try getting that many academic types to agree on a single issue! And when I thought about it at the time, it seemed completely sensible.

Assuming my goal is a tenure track position, do I really want the fact that I have this thing out there? Even in the best case scenarios, it places an asterisk over my future that committees looking to hire people into lifelong positions might take note of. Probably a silent note, possibly even a subconscious one, but the cold fact is that no one has to tell you why you didn’t get the job, especially amid a glut of qualified applicants.[II] And manifestations of consequence could be more subtle than simply not getting hired. One academic I spoke with noted that colleagues in positions of power might hold back advancement opportunities because they “don’t want to stress you out with extra work.” In the politics of academia, such a decision could be well-intended or it could be nefarious. But in the end, it wouldn’t matter. An opportunity missed is an opportunity missed. I look back at nearly a decade of work shaped by chance opportunities and shudder at the notion.

I generally don’t like talking about my health at work, so limiting disclosure as much as possible seemed like advice that would be easy to take.

And of course, I was terribly, terribly wrong. What follows is the post-mortem…

I decided to use my postdoc position as a testing ground for my new disclosure-free life. I duly noted the SFMC on required medical forms, using as few letters as possible. “Dx’d ‘X’ ‘0X” That was it. My symptoms were usually invisible and largely indistinguishable from the maladies that plague every postdoc. Hand not working? Repetitive stress. Fatigue? Tell it to the postdoc who’s just added child number two to the family. Stressed about uncertainties? Right now you’d have to be crazy not to. And so forth.

But then, as it is wont to do, life happened. The SFMC behaved as advertised. My science began to slow down. My stress crept up. My casual non-disclosure gradually morphed into something that felt like a dark secret. And then my self-confidence cratered while anger at pretty much everything began to rise.

I held out a year and a half before I broke and told my PI.[III] I didn’t want to feel as though I was making excuses. I didn’t apologize, I held back the urge to cry as much as I could. I tried to be as rational as possible. And now that it’s done, I can sincerely report that my PI and every other person I’ve talked to about it since have been nothing but supportive, both emotionally and substantively, even as the emotional turmoil of the whole ordeal slammed me even deeper into anger and depression.

Yes. As much as I’d hoped disclosure would offer some, well, closure, it didn’t. It turns out, it wasn’t just the stress of hiding a secret that had been making me miserable. It wasn’t fear that I’d lose my job or anger my PI. Somewhere along the way I’d internalized something ugly, and I’ve been picking at threads to unravel what it is ever since.

I’ve never thought of myself as a particularly fragile person. I’ve always worked fairly independently, and I put up with some weapons-grade BS drama in my early career. So what went so wrong, what made this year and a half so miserable, and the misery so persistent? Why did this self-doubt suddenly creep into and finally saturate my psyche? Enter Impostor Syndrome, the feeling that one is fooling people with respect to her or his competence, intelligence, or qualifications.[IV] The sense that one is a fraud, living in fear of what seems like an inevitable discovery. Having a secret SFMC is sort of like that. The real awfulness happens if you let the two start to bleed together. Two awful tastes that taste absolutely gawdawful together. Imagine that you’re suffering from Impostor Syndrome, fighting back the feelings that you’re hiding a secret that disqualifies you from career advancement and makes you somehow worth less than your peers. Now imagine every single person you respect, every person you turn to for career advice nodding and saying ‘Yes. That’s basically true.” Gah! Okay, stop imagining it, and never start again.

Because of course, that’s not at all what anyone giving me advice to not disclose meant. And most have been quick to say that the decision is entirely up to me, and that if I found I was uncomfortable with the situation that I should do something about it. (Which I did! Eventually.) The point of this post isn’t to say “Hey! That advice sucked!” My point here is to illuminate the unintended consequences of hearing these things as a heads-up to anyone else who might be in a similar situation. Particularly junior scientists, who’ve had the least amount of time to build up their confidence and prove their competence. Hey guys, don’t do what I just did! If you find yourself thinking that you’re “broken goods” because of anything…step back and reassess.

Finally, I want to turn the spotlight around and shine a light back at the shadows, into the waters, at the real problem. (Getting to the metaphorical sharks…)

Now that I look back, it’s hard not to hear the jarring strain of unwelcomeness in what were friendly and well-meaning words. An unwelcomeness not intended but warned of. Here there be sharks, so try not to bleed too much. It may be solid advice in an unfair world, but it’s also a tacit admission that there is little support in science for those facing external challenges. If somebody came to his or her PI and spoke about their sexual orientation and the PI’s response was “Well, you better hide that if you want to succeed…” it would be clear that there was a problem. But, depending on where you were sitting, it might not be so clear where the problem lies. What I’ve learned from all of this is that when you’re the one being told to hide something, it’s difficult not to feel like the problem is you. Somehow Here there be sharks becomes Sorry, you’re chum.

In the end, I’ve discovered that while I don’t particularly like talking about my health, keeping it secret exacted a toll I didn’t expect. I’ve discovered a network of kind and supportive people (I’ve been lucky. I don’t doubt that there are sharks out there somewhere.) I’ve recognized that I let the SFMC get tangled up with my confidence, and somehow started blaming myself for a problem intrinsic to the career. And, depressingly, I’ve realized that the stigma of medical issues is still so bad that people feel comfortable saying that the best course of advice is to hide them.

I’d end this slightly tortured aquatic metaphor by saying we need to fix this, we need to acknowledge and go after the effing sharks, capped with the obligatory “We’re gonna need a bigger boat.”[V] But I don’t think that’s quite right yet. So I’ll end with what feels more appropriate.

Currently, I’m a postdoc. I’ve come to view my career as sort of an experiment in and of itself: I hypothesize that it is possible for me to succeed as an academic scientist without going out of my (expletive deleted) mind. With an n of 1, this is pretty much guaranteed to be a lousy experiment with statistically insignificant findings. Which leads me to my disclaimer for this and anything I might write in the future: I can only explain my own experiences and reactions to them, but what advice and actions have been right or wrong for me may not be right or wrong for somebody else. So yeah, YMMV.

[I] So, it turns out there’s not a handbook somebody gives you when you get hit with the unexpected on how to integrate something like a SFMC into your life. And there’s certainly not a handbook that’s been secretly given out to those around you. So we’re all sort of stumbling through this thing with no idea of what we’re supposed to be doing. Often this means doing the wrong thing and hopefully learning from it. Touch stove. Wince. Do not repeat.

[II] It’s like some perverse reverse zombie apocalypse. Mindful hordes of brains staggering out into the market groaning “jobbbbbsssss”…

[III] So why do I say “broke?” Because somehow, without meaning to, I turned disclosure into the null hypothesis of my little experiment. Telling someone meant failure, even if he/she was someone I was all but certain would be fully supportive. This was my own mistake, constructing a psychological Maginot line against a war of my own creation. Both the notion of my internal conflicts and the career-as-experiment metaphor were getting kind of tangled with the point of the post, so I’ve pulled them down here instead.

[IV] It’s common in science, where we tend to be surrounded by very smart people who are particularly well-versed experts in that thing they work on and you don’t. So everyone you talk to knows more than you about something, often many things, and it’s easy to forget that you know more than them about something else, probably many things. I changed fields when I started my postdoc – most of the highly specialized knowledge I acquired in grad school suddenly became moot. A point that clutters up the substance of the above post, but I think a relevant one.

[V] I’m not sure if this is grounds for defense or condemnation, but I’ve got Sharknado in the Netflix cue this week. My only excuse for the toothy things being on my mind. And probably for drinking so much mid-movie that I’ll have only the vaguest memories of it to follow. Long live stupid movie drinking games, and FSM give me the hepatic fortitude to survive this one.