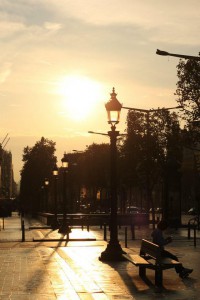 Erin Bedford is a PhD student in Chemical Engineering at the University of Waterloo and in Chemistry at the Pierre and Marie Curie University (Paris VI) in a co-supervised program. You can find her on Twitter at @erinellyse.

I have a habit of falling in love with cities. With their food, their streets, their skylines, their people. Cities have a way of bringing out parts of you that you didn’t realize were there, mostly for the better, sometimes for the worse, but either way, a city changes you. Falling in love with a city is not unlike falling in love, the real thing. It’s not difficult to imagine how a bad relationship can hurt a thesis—while some may claim that a tortured soul is necessary for pure creativity, the actual result is often lost focus and time, and I will argue that the same is true regarding your relationship with a city.

Nearly all of the grad students I know have had the experience of being stuck regarding their work. For some, it lasts a month, for others, several painful years. Getting through these periods requires perseverance, confidence that you’ll find a way out, and the ability to escape the feeling, even if the escape is only temporary. Grad students have frighteningly high rates of depression, and this feeling of being stuck may be one of the reasons why. To make it through these periods while also feeling trapped in a city you hate is just that much harder. Whether you’re in the process of deciding where to study or have already settled somewhere for the next few years, here are some suggestions to make the most of it.

Of course, a city is only one aspect of the important choice of where to study. Similar consideration applies with regards to your choice of supervisor, subject, and program. Visit the school and the supervisor, but also, visit the city. Wander down its streets and think – can you imagine yourself being happy there? Are there things to do there that you enjoy, maybe cultural or sports related? And on a more practical note, how much does it cost to live there? Studying in New York City sounds amazing to some until they discover the cost of a single room in a shared Manhattan apartment! How is public transportation? Is the city bikeable or do you need a car to get around?

Consider the city, but balance the choice with your other considerations. Should you find that perfect position except for the fact that the school is somewhere less desirable, don’t despair. With the right attitude, you can still make the most of what the city has to offer.

I spent my first year of PhD work living in Paris. I think of my relationship with the city as the plot of a cheesy romance film: young, naive grad student meets handsome, cultured, but seemingly indifferent and rude man [Paris], who she initially can’t stand but is eventually seduced and falls madly in love. Those first few months were tough—the city was crowded, it smelled funny, and it took an hour to get anywhere—and my work suffered for it. While I by no means blame the city entirely for my unhappiness, I do believe that the turning point in my productivity was closely related to my decision to get to know the city. Once I started trying its restaurants, jogging through its streets, and having wine and cheese on the shore of its river, my opinion of the city changed, and my focus began to return to my work.

Okay, so Paris is not a difficult city to fall in love with, but what if you’re studying in the middle of nowhere? My recommendation is still the same—embrace the city. Think about what the city has to offer. It’s in the middle of nowhere? The roads are probably great for cycling and you can harness the mental and physical health benefits of exercise! There’s only one decent place to go for coffee or drinks? Become a regular and look forward to the comfort and familiarity of your local hangout. No good restaurants? Perfect your cooking skills and have dinner parties with your fellow grad students (you’ll also save money!).

Embracing the city often comes down to a question of attitude. Maybe you can’t do the things that you’ve enjoyed doing in the past, but remember that grad school is a temporary situation and could be a great opportunity to discover something new. When I’m not in Paris, I spend the other half of my time in Waterloo, Canada. It’s not a terribly exciting city, but I’ve learned to enjoy the little things that are special to the area—I never would have thought that going to the market during peach season could make me as happy as it does here. If you’ve already started studying in a city that you don’t have the best relationship with, figure out what you can do to improve it. You may not think it matters now, but one day, it could be just what you need to keep going.

Do you have a story about your relationship with a city, good or bad?

[Image by Erin Bedford, used with permission from the author.]

Tagged with: decisions • Health • wellness
If you enjoyed this article, please consider sharing it!