On Not Knowing: Why I Avoided the Academic Jobs Wiki Summer Reading

Learning Capoeira, or The Therapeutic Benefits of Being Terrible at Something 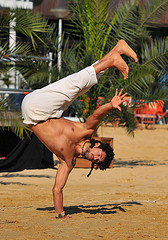 Myra Ann Houser is a doctoral candidate in African History at Howard University in Washington, DC. She blogs about the dissertation-writing process, current events, life in Washington, DC, and related issues at myraramblings.wordpress.com and tweets as @myramt.

I began playing capoiera a few months ago, and I am terrible at it.

Which is pretty perfect.

My foray into the Brazilian fight-dance began academically enough, but the process of practicing something that I am not-and will perhaps never be-good at has been a refreshing change of pace during a life point of increasing responsibility and supposed expertise development.

Like I said-academically enough.  While enrolled in a class on the History of Afro-Brazilians we read several books on capoeira.  They weren’t too illuminating as to what the sport was, providing instead a scholarly assessment of its role in Brazilian society.  One of my classmates had practiced at a studio across the street from campus, so we headed over to check it out.  An anthropological observation of a practice that we had read about turned into a new hobby for several of us, and I’m so glad it did.

I’m not normally one to gush about new hobbies or discoveries, and I wouldn’t have categorized my pre-capoeira self as being in a particular rut.  But the clarity of having something new and different-and difficult-to do helped me so much through the ABD application process and beyond.  I’m been a big believer in work-life balance, struggling through those issues (guilt, procrastination, time management) that have been so well documented on in this blog.  I came into graduate school with a few hobbies-cycling, gardening, teaching English as a Second Language, owning pets, and they had served me well.  As things tend to do, however, these became increasingly more involved and gave me a fairly good level of responsibility.  The dog needed to be walked even in the rain, and cycling in our metro area can be more cumbersome than relaxing; a friend noticed our terrace garden and commissioned me to help with our building’s landscaping committee, and someone else recruited me for a community garden board.  I loved it all, but on top of teaching and finishing coursework, it became a lot of responsibility.  Suddenly I had not only academic deadlines, but e-mails from neighbors when the public space wasn’t well-weeded enough.

I love the tried-and-true hobbies, and they had carried me through many a dark hour early on in graduate school.  After a particularly nasty comment by a crotchety old professor, the soil in my hands or pedals under my feet felt great.  And I love them still.  I enjoy zoning out while weeding or watering, and I like to watch the scenery and ponder things that are unrelated to school while biking.

But being new and terrible and irresponsible at something is so rewarding, and it was something I hadn’t experienced in a while.  As a child, I always wanted to do gymnastics but never had a chance.  Now I am an almost-thirty year-old learning for the first time how to do headstands and cartwheels.  And Keri Strugg I am not.  There is no grace here.  There is also no rhythm, something that becomes particularly evident when we drum and sing at the beginning of class-at least most of the class does; I haven’t yet figured out how to do both at once.

More than being different, however, this is a low-commitment endeavor.  It’s not that I don’t want to be good at capoeira.  I would love to be.  But I have a feeling I’ll forever be a student.  This is a stark contrast to school, where classwork demands increasing levels of knowledge and thought, and where I’m teaching or grading when not involved in my own work.  It’s even a stark contrast from real life, where friends have a tendency to ask about the field when it becomes relevant to the news or remind me to water the plants.  No, at capoiera I just show up without any preparation.  Or, if I am sick or traveling or simply don’t feel like coming, I don’t show up at all, and I don’t have to plan or account for my absence.  For two hours somebody else tells me what to do, and nobody ever asks me to help or show them anything.  I feel great afterward, and the next day my muscles stiffen up and remind me that I am not yet anywhere near skilled at this.

The joy of being bad at something-of nobody expecting anything from you and you in turn being able to flake at a moment’s notice-is valuable not just in academia, but elsewhere in adult life, as the responsibilities pile on.  Escapism is indeed glorious, and for me it hasn’t come lately from the sources from which I have long expected it.  Instead it comes from a new sport that I am completely uncoordinated and terrible at.  That’s why I’ll continue to practice-at least until I gain some semblance of knowledge or skill, in which case it’ll be time to find another hobby.

[Image by Flickr user Archangel12 and used under the Creative Commons license.]

3 Responses to Learning Capoeira, or The Therapeutic Benefits of Being Terrible at Something