If I had only known… Teaching Effectively with Music 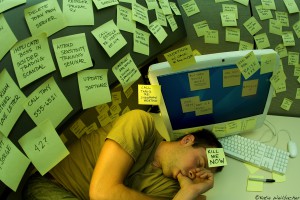 Graduate school is an academic, professional and personal learning experience. It is an arduous journey that often takes numerous failures and mistakes to reach our destination.  This post finishes our Gradhacker week of reflection in which Katy and I looked back at our old posts and Natascha described what she wishes she knew when she began grad school.

This week I was introduced to a first-year grad student in my program as a “stalwart.”  In grad school speak, this can be understood as “a student who really should be finishing up.” And boy, am I trying to do just that. Trust me. As I nail down the last bits of my dissertation proposal, I am excited to reflect on the past two years of my life as a GradHacker and revisit the posts I’ve doggedly tapped out for this blog.

My first post for GradHacker was titled “Grad School Made Me Stupid,” and I was lucky enough that it doubles as a post that went up on the first day GradHacker existed. In June of 2011, I had just finished up my first year of grad school, and I was just getting everything figured out.  Basically I figured out that a)  I was stupid and b) being stupid is a good thing.  Here is what I wrote (and quoted) then:

I started taking classes, talking to my instructors and classmates, and reading a lot.  And I realized that while I am competent, I am also very, very stupid. And for that, I will be forever grateful.

I was lucky enough to stumble across Martin Schwartz’s excellent essay, “The Importance of Stupidity in Scientific Research,” published in 2008 in the Journal of Cell Science.  Schwartz writes about the issues with framing a research question:

“For me, it was a daunting task. How could I possibly frame the questions that would lead to significant discoveries; design and interpret an experiment so that the conclusions were absolutely convincing; foresee difficulties and see ways around them, or, failing that, solve them when they occurred? My Ph.D. project was somewhat interdisciplinary and, for a while, whenever I ran into a problem, I pestered the faculty in my department who were experts in the various disciplines that I needed. I remember the day when Henry Taube (who won the Nobel Prize two years later) told me he didn’t know how to solve the problem I was having in his area. I was a third-year graduate student and I figured that Taube knew about 1000 times more than I did (conservative estimate). If he didn’t have the answer, nobody did.”

At that point, I was reading Schwartz having not even fully developed a research question yet. Fast forward to the present day and I’ve conducted numerous studies as a research assistant and one entirely on my own. I’ve fumbled about with fancy statistical models and developed a deep and abiding love for Andy Field and the StackExchange network CrossValidated.  So what’s changed for me?

I agree with my younger grad student self that having confidence in the process is necessary, even when the process seems designed to intentionally be as difficult as possible. At that point, I was making a lot more mistakes than I do now. But I still make many, many mistakes: it’s just that they are more likely to be the mistakes everyone makes rather than rookie mistakes. So in that sense, the process worked.

In the end, I believe that it is the GradHacker ethos of striving for balance that is important for running this gauntlet with as much grace as is possible (and sometimes grace isn’t possible): we balance stress reduction with productivity and teaching; we balance preparing for the future without giving into despair, and, finally, we look out for zombies while still enjoying the little things.

How did you deal with the discomfort that comes with the process of becoming a researcher? We welcome your insights in the comments!

[Image by Flickr user katiew and used under the Creative Commons license.]

Tagged with: professionalization • research
If you enjoyed this article, please consider sharing it!