3 Ways to Hack Your Class with Google+

It is no secret that I am a Google+ fan. This is mainly because Google Hangouts is hands down my favorite multi-party video chat client. This past summer I integrated Google+ into the hybrid online […] 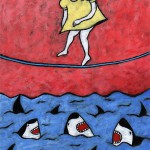 GradHackers Alex Galarza, Katy Meyers, and Julie Platt recently led a bootcamp for graduate students at Michigan State University, and I briefly listened in via twitter. In thinking about developing an online presence, participants were worried about exposure: what facets of one’s professional/academic/personal selves should be revealed online, and to what extent? Their reservations […]

Google+ Hangouts: from hanging out to making it work

Previously, I posted here about the roll out of Google+, Google’s new social networking site. At the time, there was lots of speculation that with the new stylings of Google’s other products such as Docs and Gmail, that Google+ would integrate with its other services.

Google+, Google’s newest stab at the social networking world, launched a few weeks ago as an invite-only beta on June 28, 2011. I was invited in on June 29th, which marks a milestone for me in that I don’t think I’ve been in a network so early in its infancy. With […]

Continue Reading →
“Error 403: Your IP is being rate limited by Twitter.” — @gradhacker