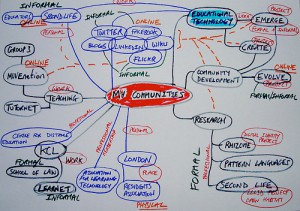 This photo was created by Steven Warburton, and can be found on the Flickr Creative Commons at <http://www.flickr.com/photos/stevenwarburton/3209461104/>.

One of the most exciting aspects of grad school is the opportunity to engage with senior scholars in your chosen field. For grads of color, this can also be an opportunity to meet one of the few professors in your field that not only shares your research interests, but might or might not look like you, talk like you, or share a similar background. Using African-American professors as one of many groups of color, we can see that the academy has a different structure for people navigating it from this specific social location. According to Jackson-Weaver’s 2011 report “Diversity and the Future of the Professoriate”,  the professoriate is 4% African-American while the American population is 13% African-American, meaning that there is an underrepresentation of African-American faculty.  These few professors have an array of experiences that could help grads in the same or similar communities to understand how the academy produces different dynamics for African-American grads and faculty. However, there is also the practical matter of staying in touch with extremely busy people. Luckily, social media can improve grads’ chances of staying current with their favorite scholars.

Social media, such as Facebook, Twitter, Linked-In, and academia.edu, can give grads the opportunity to interact with colleagues and networks. Given that you are diligent about managing your digital identity, social media can support a larger degree of networking than face-to-face meetings. In my experience, it has been extremely beneficial to look up a scholar whose work I cite in literature reviews on social media websites. From there, I can drop them a line with any questions I might have about their work. By giving them a couple of weeks to respond, I might or might not make a connection.  If the scholar does respond, it can open up the door to further conversation, and be the start of a professional relationship that leads to other contacts. If not, it might tell me that this is a person who does better with face to face contact, and until the next opportunity arises,  there are many other scholars who are online to contact. Either way, I have given myself a chance to interact that I might not have had otherwise.

While social media is important to networking, it is also key to be aware of your local resources. For many African-American grads, there is a chapter of the Black Grad Student Association on campus, which can be a rich source for networking because the community is not limited by discipline. If there is a Black Studies department, inquire about a grad student organization, and if one does not yet exist, think about starting it up. When considering on-campus networking, be sure to attend talks outside of your department that are on your area or population of interest. While the people doing the research you admire may or may not be in the communities of scholars of color, they all have experiences to share and  share (to some degree) the professoriate’s  commitment to mentoring.  By attending the talks, asking interesting questions, and perhaps passing out a business card or two, you can begin to grow relationships that are closer to home.

In sum, social media can be a helpful tool for digital networking, which is especially important for all grads, but especially grads from communities of color. All grads and faculty from communities of difference (including, but not limited to, differently-abled, religious, ethnic, linguistic, gender, and sexual groups) face different and intersecting dynamics within the academy. For this reason, connecting grads and faculty from similar experiences is of vital importance. While much of what this post describes is relevant to all of these groups and anyone else who finds the information helpful, I target these communities because the need for these grads to find faculty who can support their professional and personal development “goes without saying” according to popular logic. As many who have been a grad TA can attest, this means that frequent and explicit conversations are needed about the topic.

How have you been able to expand your community? Have you ever considered social media for professional and personal networking? Let us know in the comments by clicking here.