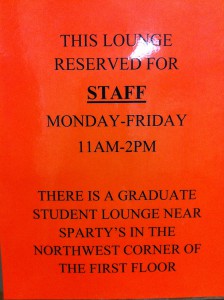 This sign hangs on the fifth floor of the building where I work as a research and teaching assistant.  The graduate lounge referenced here is on the first floor: not exactly a convenient alternative. This sign caught my attention recently because it exemplifies an attitude towards graduate students that has thus far been very hard for me to articulate. It came together for me when I was having coffee with a friend of mine (who is now a successful member of the academy, with tenure and everything) and he remarked on how difficult it was to go from being a successful teacher, employed with a decent paycheck, considered competent and a person who knew his stuff, to the status of lowly graduate student when he began his Phd. The word he used was “infantilized.”  This is a perfect word to describe what goes on when one leaves the workforce for graduate school: there is a process whereby one’s instructors and mentors (and not all of them, of course, but enough of them) reflexively deny one’s maturity. Now, I am going to give folks the benefit of the doubt and hope they don’t mean to do this to us, but then signs like the one posted here seem to indicate that, as graduate students, we inhabit a world in which the skills that used to be valuable in our careers are no longer valued or even recognized. And while it is important to be willing to learn, there is a difference between humility and humiliation.

I went into a Phd program that was directly related to my career field. I began this journey because I love what I do, but I had a lot of questions about how to do it better. I wanted to research and write. Frankly, I thought graduate school would be an additive experience. How disorienting it has been to discover that it is more like hitting the reset button on my career: nothing I have done before seems to count. The weirdest part of my journey is that I was actually staff at the very same University I now attend as a student. I work just as hard now as I did then, yet I am not even allowed to microwave some soup for two minutes in an empty lounge between the hours of 11 and 2, Monday through Friday.

I don’t mean to be a Negative Nelly, but naming this phenomenon has been quite freeing. At first I thought I was just misunderstanding people, now I understand the nuance a little better. Naming what is happening also can be empowering, so here are some of the ways I’ve empowered myself in an environment that can be frustrating and disorienting, especially for grad students like me who are, ahem, more seasoned.

1. Resist the temptation to act like an 18-year-old.  The last time I was treated like a student, I was, well, a student. An undergraduate student, to be exact. Coming back to school much much later for my Phd, I felt myself wanting to drop my business casual for jeans and ratty sweatshirts. This is a mistake. I realized very quickly that, despite the tendency for graduate students to dress like students, if I wanted to be taken seriously, I needed to dress for work.  (For more on this, see a previous Gradhacker post from Katy Meyers “Level Up Your Life.”)

2. Own your accomplishments. Okay, fellow grad students, it’s time for some tough talk here from Mama Andrea: QUIT DEMURRING WHEN SOMEONE COMPLIMENTS YOU. Kudos in grad school are infrequent enough, yet I have witnessed time and time again a grad student ducking his or her head and mumbling something about “it wasn’t that hard” or “no, it was really like this.” Stop it. Stop it right now. You are smart, you are talented, and you need to own it. I’m not saying everything you do is perfect, but for goodness sake, if someone recognizes you just look them right in the eye and say, “Thank you.” That’s it. Start practicing in the mirror.

3. Start doing some Power Poses. While we are practicing behaviors, let’s continue with a discussion of Power Poses. As human creatures, we are hard wired to recognize subtle, non-verbal cues that communicate all kinds of information about the people around us.  This video from Amy Cuddy of the Harvard Business School discusses research that found that just putting our bodies into Power Poses actually can make us more confident and have the bonus feature of making people more receptive to our ideas. It seems like I do more advocating for my ideas than anything else these days, and you’d better believe I’m sitting with my feet up for two minutes before every meeting (really, it works. Check out the video: it will blow your mind.)

In the end, I have come to believe that success in graduate school is a combination of ignoring feelings of Imposter Syndrome while simultaneously resisting an academic culture that undervalues real-world experience.  I love being in my Phd program and it is humbling to put my half-baked and naive ideas out into the world to be hacked away at. But I am not merely the sum of my ideas, and I grow as a scholar as part of the process. What I won’t tolerate, however, is the notion that just because I have not earned a PhD yet, that I am somehow a lesser person. I know less, but I can learn. I am naive about academic success, but I will become schooled. I have faith in the process, but I am wholeheartedly rejecting all the negative bits. Doing so allows me to enjoy the journey more.

How do you handle the role of graduate student? Has your experience been similar or different than mine has been? Let me know in the comments!