Powering through the Spring Slump Pets in Grad School 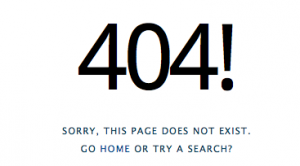 Sometimes it’s good to put yourself on 404 error

A few weeks ago, I wrote a post about using Twitter as way to develop an academic identity. Mike M. asked me about the large amount of people who I follow and how I go about “filtering out the noise.” That question inspired this post because I realized that, while I spend a lot of time discussing how to engage with various social media sites, I rarely talk about when and why I intentionally disengage with them.

Since I am known among my friends and family as a “tech” person, they often gleefully send me links about how unhealthy it is to always be “on.” I can respond that I do, in fact, take breaks from my consumption and creation on the internet. Despite being an Ed Tech graduate student, a self-described “obsessive” tweeter, and frequent blogger on various sites, I still find time to disconnect from the machine. As enthusiastic as I am about the promise of technological tools and internet sites, I find that balancing that enthusiasm with other activities helps me to avoid the potential negative impacts of being constantly engaged.

Email. Twitter. Facebook. The constant pinging of our phones. The allure of just one more game of Bejeweled or Angry Birds or Draw Something. These small moments of connection can turn into an unhealthy avalanche of distraction. A number of authors have tackled this issue.  In Hamlet’s BlackBerry, author William Powers advocates for the Digital Sabbath. The New York Times published an article called The Joy of Quiet, which advocated for quiet contemplation in order to protect one’s muse.  Noted social media scholar danah boyd outlines her own approach to taking an email sabbatical (come on: doesn’t that sound heavenly?).

Personally, I give myself what I think of as a “twabbatical” for a full twenty-four  hours every week. I begin my digital detox on Saturday night and resume electronic communication on Sunday evenings.  Even with a twenty-four email response policy for student emails that I receive, I figure that if someone emails me at 9:31 pm on Saturday night, I can still respond when I log back in at 9:30 pm on Sunday for a response and be within the spirit of the policy. I fully admit to missing Twitter on Sundays, and have been known to fully delete the offensive apps from my phone for the day and reinstall them in the evening in order to avoid the temptation of the quick peek. If there is a particular week where it isn’t in my best interest to skip engaging with digital devices, than I don’t take my time off. I find that since I began this habit of disconnecting for a small window each week that I return to higher productivity on Monday morning. Also, I don’t end up with that overwhelming sense of dread and burnout that used to follow me around.

How do you balance your digital and nondigital lives? Let us know in the comments!

Tagged with: #twabbatical • digital detox • email vacation
If you enjoyed this article, please consider sharing it!

One Response to Digital Detox, Email Vacations, and #twabbaticals