Creativity for Work and Play Surf’s Up!: Thriving Amid Chaos 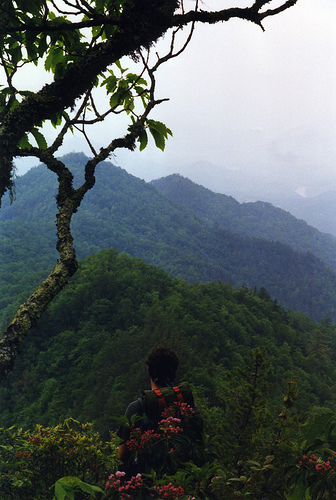 Natascha Chtena is a PhD student in Education and Information Studies at the University of California, Los Angeles. You can follow her on Twitter @nataschachtena.

Thousands of tired, nerve-shaken, over civilised people are beginning to find out that going to the mountains is going home; that wildness is a necessity; that mountain parks and reservations are useful not only as fountains of timber and irrigating rivers, but as fountains of life – John Muir (1838-1914)

There’s this idea among grad students that spending time in nature is wasteful, or that it’s time that could be better spent being productive, finishing required readings, writing up funding proposals, polishing term papers, networking with colleagues, grading stacks of homework, or submitting abstracts here and there. Even nature enthusiasts like myself, oftentimes find themselves tempted to “stay in and save time”. Except that “saving time” is nothing but an illusion. Sure, on a given day maybe you do. But long term, the symptoms of Nature Deficit Disorder are paralyzing: depression, anxiety, low self-esteem, extreme fatigue and a short attention span, to name but a few.

Not too many people use the term NDD, however. Although we’re all more or less familiar with the aforementioned symptoms, mainstream culture tends to accept them as the “great ills of our time”. A healthy diet and frequent exercise are thus prescribed as an antidote. But what if that’s not enough to heal the chronically burnt out grad student? A growing body of literature suggests, that we might indeed have to invite nature into our work and exercise routine if we want to be happy, healthy and productive in the long term.For example, a study that compared exercising indoors with exercising in natural environments found that the latter was associated with greater feelings of revitalisation, increased energy and positive engagement, together with decreases in tension, confusion, anger and depression. In another study of college students, those who participated in a nature walk performed higher on a subsequent CDA test than those who went on an urban walk or relaxed in a comfortable room with magazines and light music prior to the test.

I’m not necessarily suggesting that you hop into a car and drive two hours out into the wilderness every weekend. I know that’s not always possible; rather, an adjustment of attitude is the key. Do you live in a temperate climate? Take advantage of that perfectly mowed university lawn and have your lunch barefoot on it instead of in your office. Got 400 pages to read through or grade this weekend? Do it at the beach, the park or that garden you’ve been neglecting for way too long. In fact, research shows that if we move our work outside, to even the smallest flake of nature like a garden or a park we can restore our attentional capacity, and thus our ability to work smarter and better. However, while working outdoors is at its best invigorating and soothing, it does require an extra dose of discipline and determination. If you take a stack of papers to the park and don’t get past the first page, choosing instead to fall asleep on the luscious, sun-kissed lawn, you will inevitably come to associate nature with wasted time.

Granted, not everyone has an equally easy access to nature. I do live in LA and I do speak from a position of privilege. But if going out into nature is just not possible at a given place or time, you can bring nature into your life and work. Research related to workplace environments, for instance, suggests that there is a strong correlation between indoor plants and nature views, and improved employee morale, decreased absenteeism, and increased worker efficiency result from such workplace enhancements.When plants were added to a college computer lab, the study participants were more productive (with 12% quicker reaction times on tested computer tasks) and less stressed—though there was no difference in number of errors made on the test. Additionally, participants reported feeling more attentive and better able to concentrate in the presence of plants.

Still not convinced? Think about your childhood happy place. Is it inside a badly lit library, lab, office or bedroom, glued in front of your computer? Probably not. Even if you weren’t lucky enough to grow up with a treehouse, chances are your favorite place was somewhere outdoors, away from adult supervision. Being around trees, ocean, sand, birds, bugs, flowers, dirt and so on, is our natural state of being. Nature is home. We might have adapted to a life confined in artificially lit concrete boxes, but not completely. The evidence is all around us, if we just look close enough.

Tagged with: productivity • stress • wellness • workflow
If you enjoyed this article, please consider sharing it!